We are now in the chill of winter, which can be challenging for any construction-based business. Blue Ox Timber Frames recently had the opportunity to race Mother Nature on a project located on the very northern tip of the Upper Peninsula of Michigan.

If you are unfamiliar with the Upper Peninsula, it is the northern part of Michigan that borders Wisconsin and is surrounded by Great Lakes on three sides. The climate on the U.P. is dictated by those three Great Lakes (Superior, Michigan, and Huron) on its shoreline. This means winter can come early, and bring with it frequent heavy snowfall.

This project wasn’t just on the U.P, but on the Keweenaw Peninsula of the U.P., which is the northernmost tip of land extending into Lake Superior. If Lake Superior and November don’t make you a little nervous, you probably aren’t familiar with the Edmund Fitzgerald. Heavy snow and excessive wind can happen any time after mid-October on gitche-gami , which would scuttle any plans for raising a timber frame. The building site was exposed within a few dozen feet of Lake Superior, so there would be no hiding from inclement weather. 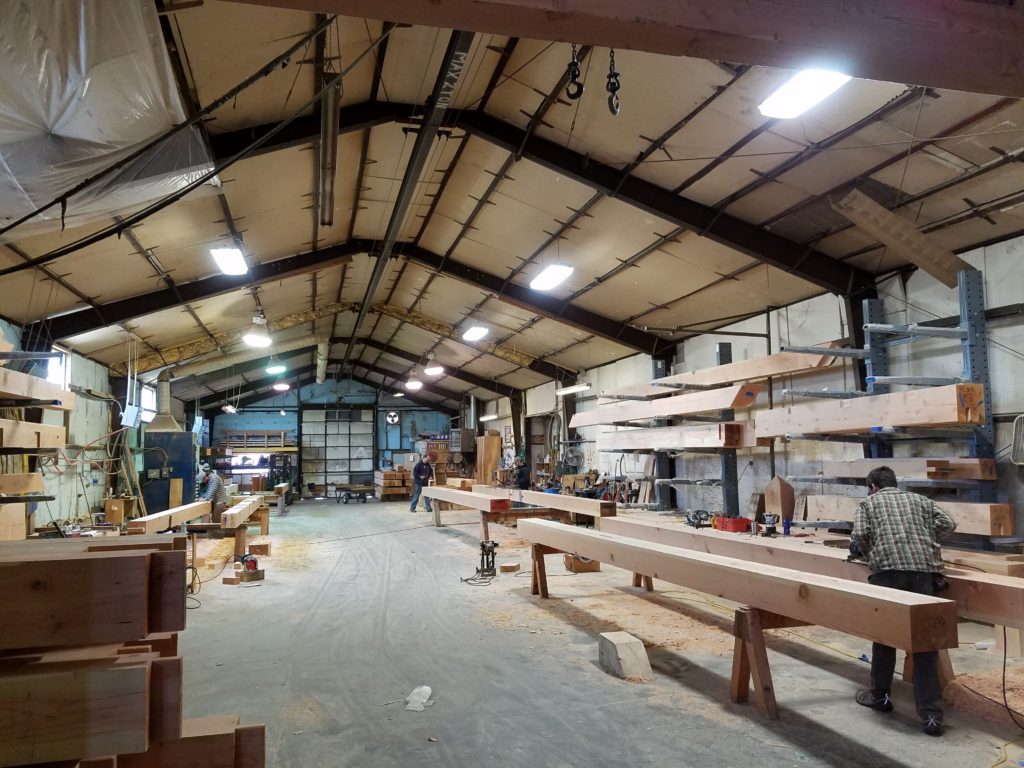 The shop racing the clock throughout the month of October.

Like many of our construction project, this one had many moving parts that needed to align before we could travel to Michigan to raise the frame. We had the Douglas Fir timbers from Reliance Specialty Building Products and were ready cut the frame in late September, with a target date of late October for the raising. Our goal was to have the frame up, and the structural insulated panels installed, before Old Man Winter showed his wrath. This would give the finish carpenters and tradesman an enclosed structure for the burly winter months.

You may think that a few weeks seems like more than enough time to get the project cut, fit, sanded, and finished for a late October raising. That, of course, depends upon the size and complexity of the project. With this home, we did not want to leave anything to chance. The shop was running overtime every week to control what we could control (making the timber frame), and we hoped that factors outside our control (the weather) would break our way. Not only was our crew working overtime, we brought in extra help from Custom Timber Frames and Haabala Construction to maximize our shop hours. 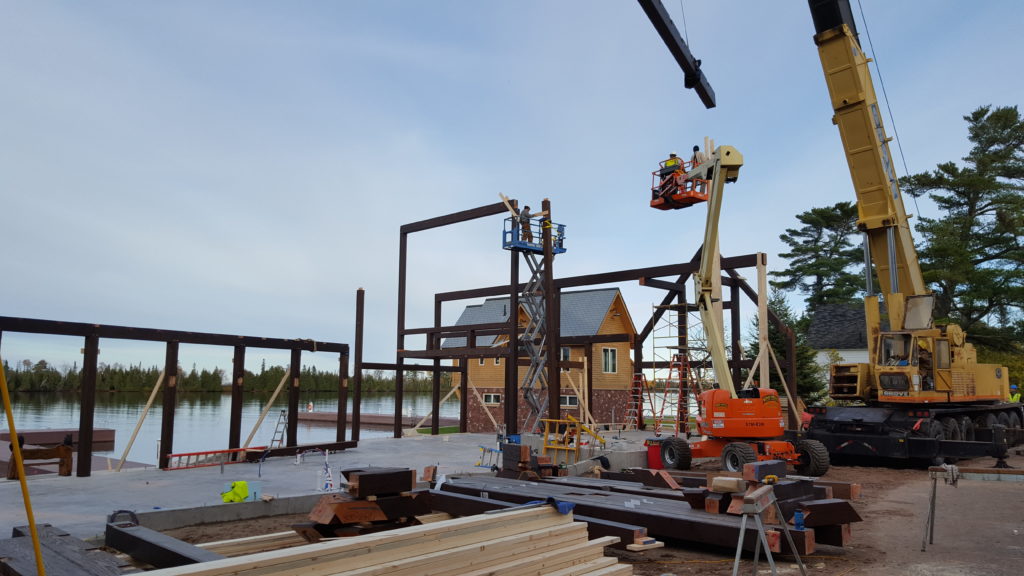 After a lot of hard work and many long hours in the shop, the frame was loaded and ready to ship. The fall weather, while it got cooler, never broke into an early winter storm. The raising crew had to deal with some rain, but they otherwise had unseasonably warm weather to raise the timber frame. The frame and panels went up without a weather-related delay, and now the finish carpenters can spend the remainder of the winter months finishing the house while enjoying a great view of Lake Superior. Blue Ox Timber Frames could not have accomplished this without the dedication of our craftsmen…and a little help from our friends. 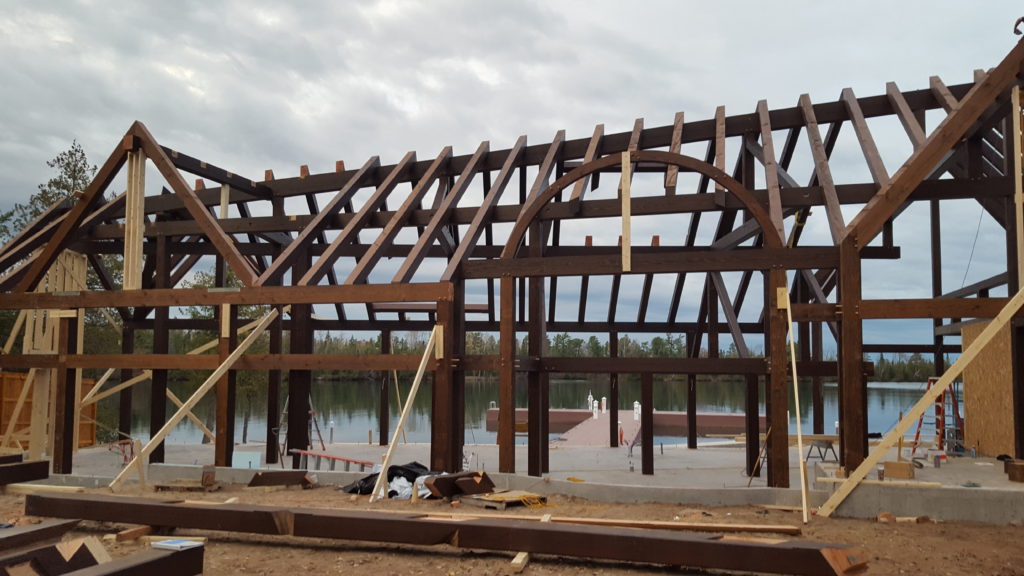 Blue Ox will return to this project after it is complete for an update. Most likely in the late summer or fall. Maybe late September? The fall colors would be nice. 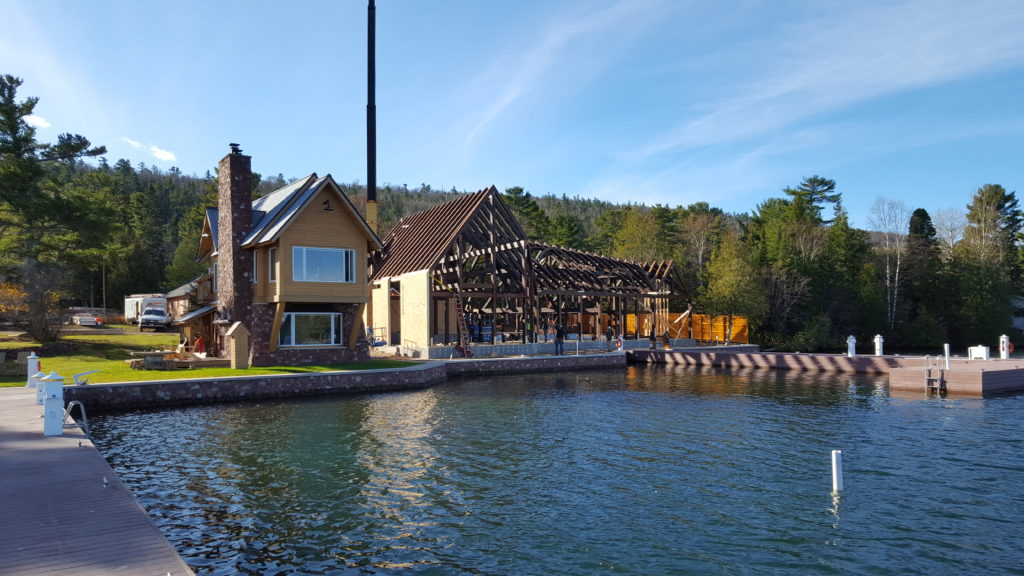